It's not over until Rove & Co. are in jail

A funny thing happened on the way to a McCain "victory" in Ohio and other states.

Karl Rove's computer guru got hauled into court the day before election day and was ordered to testify about what he did during the 2004 vote count in Ohio.

Republican IT "Guru" Mike Connell Ordered To Give Deposition

The Republican IT guru, recently described as a "high tech Forrest Gump" for his proclivity to be "at the scene" of so many troubling elections since 2000, and even at the heart of the "lost" White House email scandal, has been ordered by a federal judge to appear for an under-oath deposition next Monday in Ohio.

The BRAD BLOG has learned that Mike Connell, the Republican IT guru whose company, GovTech Solutions, created Ohio's 2004 election results computer network appeared in federal court today, as compelled, and has been ordered to appear for his deposition on Monday, November 3, just 24 hours before Election Day 2008.

[...] Though Connell's attorneys have fought to quash the subpoena, recently issued after the judge lifted a stay on the case several weeks ago, , it looks like his options to avoid testimony, or at least jail for avoiding it, may have come to an end. The attorneys in the case have said that Connell's testimony may well lead to the subpoenaing and under-oath questioning of Karl Rove, who, they say, would be unable to use Executive Privilege as an excuse to avoid such a subpoena in a civil RICO case...


The High-Tech HighJack of Ohio


Posted by Dixychik No comments:

STEALING AMERICA: Vote by Vote from Concentric Media on Vimeo.
Posted by Dixychik No comments:

Ballots picked up, then disappear

The disappearance of some absentee ballots, picked up under unusual circumstances, has raised some serious questions.

Three Hialeah voters say they had an unusual visitor at their homes last week: a man who called himself Juan, offering to help them fill out their absentee ballots and deliver them to the elections office.

The voters, all supporters of Democratic congressional candidate Raul Martinez, said they gave their ballots to the man after he told them he worked for Martinez. But the Martinez campaign said he doesn't work for them.

Juan ''told me not to worry, that they normally collected all the ballots and waited until they had a stack big enough to hand-deliver to the elections department,'' said voter Jesus Hernandez, 73. 'He said, `Don't worry. This is not going to pass through the mail to get lost.' ''

Hernandez said he worries his ballot was stolen or destroyed. He and two other voters told The Miami Herald that the man was dispatched by a woman caller who also said she worked for Martinez. But the phone number cited by the voters traces back to a consultant working for Martinez's rival, Republican congressman Lincoln Diaz-Balart.

Virtually the entire mainstream electronic media drank ACORN Kool-Aid this month brewed up by the Republican National Committee. Almost no one seriously challenged John McCain's comical assertions that ACORN, a grassroots voter registration group, "is now on the verge of maybe perpetrating one of the greatest frauds in voter history in this country, maybe destroying the fabric of democracy."

While the Republicans had the distracted media searching for links between Obama and ACORN, RNC operatives were busily completing one of the most massive voter suppression and purging efforts in American history, stealing hundreds of thousands of Democratic votes across the embattled swing states and striving to arrange chaos and endless lines at the voting booths next week.

Election watchdog groups are accusing the Colorado Secretary of State of purging up to 30,000 voters in violation of federal law.

Common Cause of Colorado, Mi Familia Vota, and the Service Employees International Union have filed suit in U.S. District Court in Denver. The suit seeks to prevent any more voters from being removed in violation of the National Voting Rights Act of 1993, which mandates that a voter cannot be removed from the rolls less than 90 days before an election except due to felony conviction, death, incapacitation or a specific request to be removed. Also sought is a preliminary injunction to restore the names of those removed. The case is expected to be heard Wednesday morning.

Seems like every day, we hear about more efforts by Republican operatives to suppress the vote. Kyla Berry, a college senior in Georgia, received a letter three weeks ago telling her that she is not a U.S. citizen and is not eligible to vote.

That came as a surprise to Berry, who was born in Boston and has a U.S. passport and birth certificate to prove it. The letter, dated Oct. 2, gave her a week from the time it was dated to prove her citizenship. One big problem: The letter was postmarked Oct. 9.

Berry is one of more than 50,000 registered Georgia voters whose names have come up as a mismatch when checked against state computer records. At least 4,500 of those people are having their citizenship questioned, and the burden is on them to prove they are eligible to vote.

Please contact ALL your friends and family in North Carolina and alert them to the confusing ballots with which some voters have already encountered difficulties, particularly among new voters and the elderly. Voting the straight Democratic party ticket on the ballot DOES NOT include voting for the President!!

In Florida’s “butterfly ballot” debacle of 2000, voters in Palm Beach County were so confused by the odd layout that many appear to have voted for the wrong candidate by mistake. At the time, there was a lot of talk about improving ballot design. Eight years later there are still far too many badly done ballots. North Carolina may have the country’s worst. It is already causing confusion with early voters. And if the presidential race is close, it could change the outcome.

Like a number of states, North Carolina allows its voters to choose a straight-party ticket. To do that, voters can mark one box and cast votes for all of the nominees of their preferred party. But North Carolina’s ballot has an unexpected twist. Even if a voter checks the straight-party box, he or she must vote separately for a presidential candidate.

North Carolina’s ballot explains the need to check two boxes, and election officials make an effort to inform voters of the drill. But the ballot is still far too confusing. 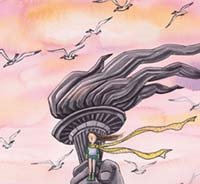 Eternal vigilance is the price of liberty -- Thomas Jefferson

While electronic voting systems hold promise for a more accurate and efficient election process, numerous entities have raised concerns about their security and reliability, citing instances of weak security controls, system design flaws, inadequate system version control, inadequate security testing, incorrect system configuration, poor security management, and vague or incomplete voting system standards, among other issues. For example, studies found (1) some electronic voting systems did not encrypt cast ballots or system audit logs, and it was possible to alter both without being detected; (2) it was possible to alter the files that define how a ballot looks and works so that the votes for one candidate could be recorded for a different candidate; and (3) vendors installed uncertified versions of voting system software at the local level. It is important to note that many of the reported concerns were drawn from specific system makes and models or from a specific jurisdictions election, and that there is a lack of consensus among election officials and other experts on the pervasiveness of the concerns. Nevertheless, some of these concerns were reported to have caused local problems in federal elections resulting in the loss or miscount of votes and therefore merit attention.

Ohio's Presidential Election was a fraud in 2000 and 2004. Care to go for three? They can. They control the elections. That'll be three times Ohio handed over the country. What about the current insane financial devastation? With that, George Bush can cross the last task off his "to screwup" list. Congress and the major candidates don't even want to get it. Wall street most surely gets it - and keeps on getting it. Meanwhile people are losing their homes, jobs and savings. We need to hold them all accountable and stop all this. In Ohio, the poster child for stolen elections... does Main Street really care??

"In Ohio" is freely available for use by others in films, documentaries, live performances, radio and CD's. Interested parties email Gary Polvinale: garypcd@madogmusic.com

Go here to listen and for your free download:
Madog Music

"STEALING AMERICA: Vote by Vote does for American democracy what An Inconvenient Truth did for global warming."

Why is this film a "must see"? Inaccurate vote counts, illegal purging, improbable machine errors, and more have led millions of people to believe that recent national elections were stolen.

Look at the evidence in this film and decide for yourself: 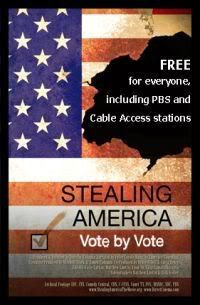